Access to Information – an Instrument for Achieving our Goals 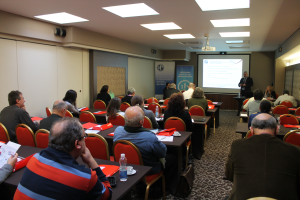 More than 50 representatives of NGOs from different regions of Bulgaria attended the event.

Officials from the Council of Ministers presented government initiatives for more openness and transparency.

Anton Gerunov, the head of the cabinet of the Deputy Prime Minister Rumiana Bachvarova, presented the plans of the government to develop the Open Data Portal, introduced by the 2015 APIA amendments.

Milena Nedeva, an advisor in the cabinet of the Deputy Prime Minister Rumiana Bachvarova, presented the Open Government Partnership initiative and the schedule for the adoption of the Third National Action Plan of Bulgaria.

The Public Consultations Portal www.strategy.bg was presented as an instrument for more active public participation in the policy and decision making by the chief expert from the administration of the Council of Ministers, Iskren Ivanov.

A number of successful initiatives, products, campaigns of NGOs illustrating successful use of the APIA, public sources of information and open data were presented – e.g. the initiative for direct civil participation online, a geo-info system showing the status of rivers in Bulgaria, the regional economic development profiles, an index of local integrity system, a platform showing the status of the media market in Bulgaria, the initiative for transparent judicial appointments, the register of collaborators of the communist state security services, results from a civic hackaton, and a number of examples of using open data for achieving more active public participation and more transparency in government.

The movie “I have the right to know” illustrating the stages in searching and obtaining information from public bodies under the Bulgarian APIA was shown: https://youtu.be/3IE7ySGeOUA.

The conference was the concluding event of the project “Enhancing the Capacity of Nongovernmental Organizations to Seek Public Information,” supported by a grant under the NGO Programme in Bulgaria under the Financial Mechanism of the European Economic Area 2009 – 2014 (www.ngogrants.bg).