Information Days in Yambol and Sliven 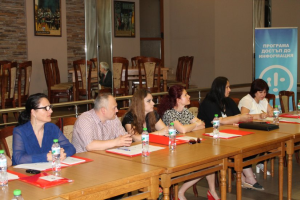 On 14 and 15 June 2016, the Access to Information Programme held two Access to Information Days in the towns of Yambol and Sliven respectively. 57 representatives of regional and local administration, NGOs, journalists, and citizens from the two towns took part in the events organized by AIP.

During the seminars, the AIP Executive Director Gergana Jouleva presented the results from the 2016 audit on institutional web sites performed by AIP and particularly the state of the active transparency of the institutions in each of the two regions and their positions in the 2016 Active Transparency Rating. She also presented the new obligations for proactive publication of information online, introduced by the 2015 amendments to the Access to Public Information Act (APIA).

During the workshops, the AIP attorneys-at-law Kiril Terziiski and Alexander Kashumov presented successful tactics for obtaining access to information from public bodies and from public registers and government data sets to journalists, NGOs, and activists.

Information and pictures from the meetings held in the towns of Yambol and Sliven were published and disseminated through AIP Monthly FOI Newsletter, June 2016 issue (in Bulgarian).