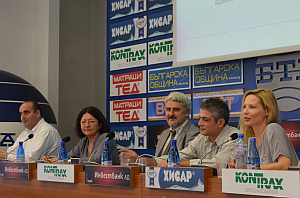 In the eve of the 15th anniversary since the adoption of the Access to Public Information Act in Bulgaria, AIP reminded the important moments in the development of the law and the implementation practices.

The APIA was promulgated in the State Gazette on July 7, 2000.

The AIP has been the leading organization in the public debate and the advocacy for the adoption of the law and for its positive amendments in 2002, 2007, and 2008.

Since the APIA adoption in 2000, AIP has been monitoring the access to information provision practices by the legal help it provides, including representation in court, to citizens, journalists and NGOs, by performing special surveys, including the annual audit on institutional web sites, and with the assistance of the journalists from its nationwide coordinators’ network.

AIP Executive Director Gergana Jouleva presented systematized data from the annual government reports on the state of the administration. They show the number of the filed access to information requests during the years; the types of requesters who filed the highest number of requests to the public bodies; what type of information was of highest interest to the public; what was the relation between the filed requests and the issued refusals, and the complaints against them. The data is accessible in English on AIP web site: http://www.aip-bg.org/en/legislation/APIA_Implementation/205704/.

The press conference was held within the project Civil Center for Support of Transparency in Public Life, supported with a grant by the America for Bulgaria Foundation.