Results from 2015 AIP audit on institutional web sites, 2015 Active Transparency Rating for Bulgaria and the 2015 Budget, Financial Transparency and Integrity of Municipalities Map

The results were presented on April 15, 2015 at the Press Club of the Bulgarian News Agency, Sofia. 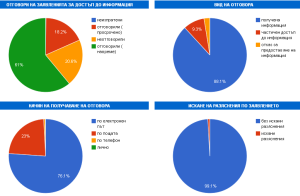 The aim of the audit, which AIP performs via an online platform since 2010, is to evaluate how the executive bodies fulfill their obligations for proactive publication of information online under the Access to Public Information Act and other legal regulations and to assess their readiness to respond to electronic requests.

The focus of the 2015 Audit on institutional web sites is on Budget, Financial Transparency and Integrity, updating the audit indicators in line with the new obligations introduced by the amended Public Procurements Act.

The 2015 audit was performed within the period 23 February – 23 March 2015 by eight reviewers from the AIP team. 544 web sites of 544 executive bodies at a central, regional, and local level, and also public-law entities and independent state bodies were reviewed and assessed on the base of 72 (81 for the municipalities) indicators. 542 electronic requests were filed. AIP sought copies of the orders assigning the information officers within the respective public bodies and their job descriptions.

The results are incorporated from AIP Information Management System and are online available. The system visualizes the results

Comparative Tables of the 2012 – 2015 results and the results from 2015 Audit on 544 Institutional Web Sites by Type of Public Body, prepared my AIP Executive Director Gergana Jouleva.

Analysis of the results will be included in AIP annual report Access to Information in Bulgaria 2014-2015 which is to be released in May 2015.

The audit was performed within the project Civil Center for Support of Transparency in Public Life supported by a grant from the America for Bulgaria Foundation.