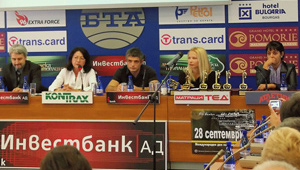 The Eight Right to Know Day Awards Ceremony was held on 28 September in the Bulgarian News Agency, Sofia. Posters were disseminated in the countryside through AIP's coordinators network. Press releases were sent to national and regional media. The event was broadcast live on Internet. More than 60 media – national and local – covered the event. More than hundred people attended the ceremony.

You can watch video clips (in Bulgarian) from the 2010 Right to Know Day Awards Ceremony held by Access to Information Programme.

The organization and holding of the 2010 Right to Know Day in Bulgaria is supported by a grant from the Trust for Civil Society in CEE and by the America for Bulgaria Foundation.

JSC kindly contribute to the celebration of the Right to Know Day again.