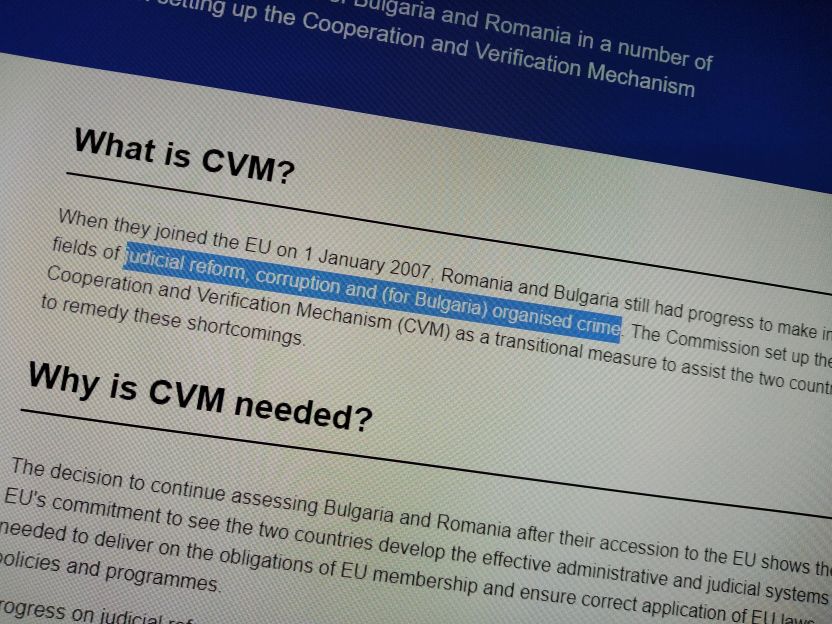 In May 2019, Dachkova filed an request to the Minister of Justice, requesting that she be provided with “Memos from the meetings held by Members of the Supreme Judicial Council, the Supreme Court of Cassation chairman, the Supreme Administrative Court chairman and the Prosecutor General and his alternates, as well as by all other representatives of the judiciary, and by the Commission for Combating Corruption and the Withdrawal of Illegally Acquired Property, with European Commission representatives in the framework of the expert missions in Bulgaria under the Cooperation and Verification Mechanism, held between January 1, 2007 and March 19, 2018".

In June 2019, the Director of MoJ's Legal Activities Directorate refused to grant access on the grounds that the information requested was not individually relevant as it reflected the views, positions and recommendations made by or for the Ministry in relation to current or upcoming negotiations. Therefore, it is claimed that access is restricted within the meaning of Art. 13, para. 2, (2) of the Access to Public Information Act (APIA)*. On the other hand, it is stated that the information does not constitute "public information within the meaning of Art. 2, para. 1 of APIA** in its purest form." This is because the meetings of representatives of EC's missions under the Cooperation and Verification Mechanism during this period were closed.

"The Supreme Judicial Council (SJC) published one such memorial last year to make it visible for all that Supreme Court of Cassation (SCC) chairman Lozan Panov has expressed a critical opinion on the state of Bulgarian judiciary, an opinion some would consider "unpatriotic," almost treacherous, according to interpretations of the media that published it. On this occasion, Dorothea Dachkova requested that she receive all such memos so that the discussions throughout the whole process, which lasted for more than 10 years, could be seen in their entirety. The Administrative Court Sofia-city has accepted that the deadline under Article 13 of the APIA* has expired with respect to a large part of the documents. Separately, no assessment was made (with respect to other memos) of the prevailing public interest in providing the information, under Article 13, para. 4 of the APIA*, which is sufficient grounds for annulment of the refusal decision made by the Ministry of Justice.

The Court's firm view is very important - the view that the restriction related to the protection of the preparatory process within the administration is always subject to a prevailing public interest test. In this way, it will be made clear to the administration that transparency is an inherent part of its work and even documents created in the ordinary course of work can be subject to the APIA, when taking into consideration the principle of openness and accountability."

**Art. 2.
(1) Within the meaning of this act, public information shall be any information relating to the social life in the Republic of Bulgaria, and giving opportunity to the citizens to form their own opinion on the activities of the persons having obligations under this act.