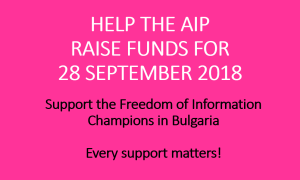 The Access to Information Programme is launching a fundraising campaign to support the organization and holding of the 16th Right to Know Day Awards Ceremony in Bulgaria on September 28, 2018.

This is the Freedom of Information Champions Day in Bulgaria - the climax in the national campaign for encouraging the exercise of the right to information and pushing for enhanced government transparency and accountability.

Everyone can contribute via the Indiegogo platform or to the AIP bank accounts till September 10, 2018.

The Right to Know Day was established in 2002 at an international conference in Sofia, Bulgaria and since then celebrated by thousands of Freedom of Information Advocates around the globe.

Due to its impact, 28 September was recently recognized by the UNESCO as the International Day for the Universal Access to Information. The Right to Know Day will be duly addressed by the European Commission in September 2017.

Being one of the founders of the Right to Know Day, for 16 years, the AIP holds the ceremony in Bulgaria.

At the Right to Know Day Awards Ceremony held on Sept. 28, the AIP gives the “Golden Key” awards to citizens, journalists, and NGOs, who have actively exercised their right of access to information and public bodies with excellent transparency practices. Institutions with bad transparency practices receive the “Padlock” anti-award.

The Right to Know Day is the strongest tool in the AIP campaign for encouraging the exercise of the right to information and pushing for enhanced government transparency and accountability. The annual media outreach is of dozens publications, radio and TV shows.

Help the AIP reach the goal of $ 5,000 to organize and hold the 15th Right to Know Day Awards Ceremony in Bulgaria on September 28 in support of its mission to assist the exercise of the right to information by monitoring legislation and implementation practices, participation in public and media debates, providing legal aid, and assisting litigation in courts, supporting journalistic investigations on topics of public interest, and by running raising awareness campaigns, and cooperating with national and international partners.

You can select Anonymous if you do not want your name to be public in the supporters' list: https://igg.me/at/FOI-Champions-Day-Bulgaria

Or donate on the AIP bank accounts:

We need your support to: