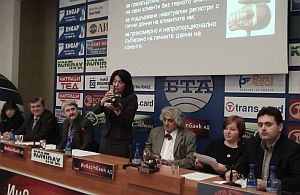 Access to Information Programme (AIP) and Internet Society Bulgaria held the Big Brother Anti-awards ceremony in Bulgaria on February 16, 2011, 11.00, at the National Presscenter of the Bulgarian News Agency.

The awards are given to government institutions, private companies, or individuals, who have done the most to invade personal privacy. The Big Brother Award was founded by Privacy International – a human rights group working for the protection of privacy.
PI maintains the Big Brother Awards International Site. The name of the award is inspired by the famous anti-utopian novel by George Orwell. The phrase "Big Brother is watching you" refers to invasive surveillance, limiting the personal freedom.

The Big Brother Awards ceremony is taking place in Bulgaria for the fifth time. The last ceremony was held in 2009. The awardees of the Big Brother Anti-Award are selected by a jury.

The 2011 Big Brother Awards jury has the following members:

The jury had to select a state institution and a private company which had mostly deserved a special place among those who were nominated for violating the right of privacy for the past year.

Among the nominations were: the Parliamentary Standing Subcommittee for Oversight and Monitoring of the Use of Special Intelligence Means, the Minister of Internal Affairs, the Prosecutors Office, Alcatel-Lucent Company, Alpha Bank – Bulgaria, a hospital in the town of Smolian, and even the Electronic Communications Act, effective as of May 10, 2010.

The jury decided the two awardees to be:

A joint anti-award for the National Assembly and the Ministry of Interior in the category for state institution which had done most to violate the right of privacy as they have created and sustained preconditions for systematical violation of the right to privacy and personal data protection, more precisely:

The event was broadcast live online and had been extensively covered by media.

You can see pictureс from the Big Brother Anti-awards ceremony in our Gallery.

Information about Big Brother Awards in Bulgaria can also be found at: http://bg.bigbrotherawards.org/