Alexander Kashumov, Head of the AIP legal team, was recognized as the 2008 "Attorney of the Year" by the Legal World magazine. 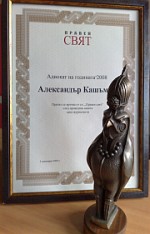 It is the second time the magazine presents the awards. The nominations are based on the results from two public opinion polls among judges and lawyers from the country. The magazine also performed a survey among journalists who cover the judiciary. Alexander Kashumov was nominated on the base of the results from that survey. The awards ceremony was held on December 2, 2009.

Interview with Alexander Kashumov in Bulgarian is published in the November issue of AIP FOI Newsletter.