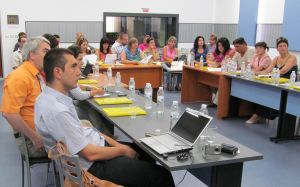 On July 20, 2012 in Radio Shumen at the town of Shumen, AIP held a training with journalists from Shumen, Razgrad, Dobrich, Varna and Silistra on how to use public registers and on public bodies obligations for active publication of information.

Gergana Jouleva, AIP Executive Director, presented the results from the 2012 AIP audit on the active disclosure of public information online performed by AIP in January - March 2012. She emphasized that a number of institutions have improved their web sites since then, the AIP audit also contributing to positive changes of active transparency.

28 journalists took part in the training. The Ombudsman of Shumen, Ivan Kapralov also attended. He suggested that the regional ombudmen's web sites should also be audited.

The trainings was the last in a series of 7 held within the framework of the project Civil Audit of Active Transparency of Government (CAATOG) supported by a grant from the Trust for Civil Society in Central and Eastern Europe.