On April 4, 2012, at a press conference at the Bulgarian News Agency, Access to Information Programme presented the 2012 Active Transparency Rating and the Public Registers Portal in Bulgaria. 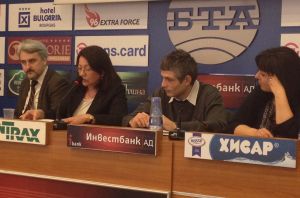 Access to Information Programme presents the first ever Active Transparency Rating in Bulgaria. The Rating is based on the results from the 2012 audit on the web sites of the administrative structures of the executive power in Bulgaria from the point of view of the obligations for online publication of information under the Access to Public Information Act (APIA) and other legislation.

Access to Information Programme (AIP) has been auditing the web sites of public bodies in Bulgaria since 2006, but rates the institutional level of transparency for the first time.

Within the period 23.01 – 16.03, 2012, AIP audited 474 web sites of 487 administrative structures of the executive power at a central, regional, and local level. The level of transparency was assessed on the base of 39 or 40 (for the municipalities) indicators. The maximum score is 60.5.

AIP also filed 485 access to information requests within the audit. The responses on those requests were used for verification of the data collected in the Portal Public Registers in Bulgaria: http://www.publicregisters.info/.

The 2012 Audit on Institutional Web Sites aimed to assess:

The audit results (in Bulgarian) include the responses of the institutions on the access to information requests. Comparative data for 2010 - 2012 are available here.

The Public Registers Portal in Bulgaria


AIP also launched the first Public Registers Portal in Bulgaria: http://www.publicregisters.info/.  It contains an enormous volume of systematized information and is a result of the 10-months efforts of AIP team.

Within the period June 2011 – March 2012, AIP reviewed and identified the legal basis for the creation and maintaining of public registers, reviewed the existing online registers, filed access to information requests to 485 institutions about the public registers they maintained and incorporated the results in the Public Registers Portal: http://www.publicregisters.info/.

The Portal http://www.publicregisters.info/ launched and maintained by AIP, contributes to the transparency and accountability of public bodies and facilitates citizens, business, NGOs and journalists in their search for information which should be available, up-to-date, and accessible, which in most of the cases is not known by the seeker.

The two surveys are made within the implementation of the project Civil Audit of Active Transparency of Government, supported by a grant from the Trust for Civil Society in Central and Eastern Europe.