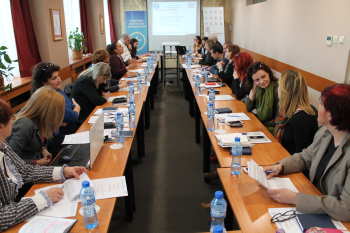 On February 24, 2017 in Sofia, Access to Information Programme (AIP) held the annual meeting with the journalists of its country-wide coordinators' network.

AIP Executive Director Gergana Jouleva presented key achievements from AIP advocacy activities in 2016. The 2017 goals and challenges before the AIP and the coordinators' network were outlined.

The Head of AIP legal team Alexander Kashumov presented the AIP statements submitted on draft laws and proposed amendments in 2016 re the Anti-corruption Law, the Prevention of Terrrorism Law, the Electronic Communications Law, the Penal Code with regard to the libel and defamation, the Third National Action Plan within the global initiative Open Government Partnership, interpretation of provisions in the Law on Prevention and Ascertainment of Conflict of Interests.

Alexander Kashumov also presented the AIP contribution to the amicus curie submitted jointly with four advocacy organizations to the Grand Chamber of the European Court of Human Rights which resulted in Judgment as of November 8, 2016, recognizing the right of access to information under the European Convention of Human Rights.

Darina Palova from the AIP legal team presented statistics and characteristics of the cases referred to AIP for legal help and consultation during 2016. Kiril Terziiski presented an overview of ATI litigation.

Based on a number of interviews, the AIP coordinators, all of them journalists in the regional cities of Bulgaria, outlined the level of implementation by the local and regional public bodies of the new obligations for proactive publication of information and responding to e-requests, as well as the readiness of officials to attend specialiced trainings on the APIA implementation organized by the AIP.

AIP presented the Coordinator of the Year award to Todor Grozdev, AIP coordinator in Pazardzhik.  Interview with Maslyankova is also published in the AIP monthly FOI Newsletter for February 2016 (in Bulgarian).

The annual meeting was held within the project Civil Center for Support of Transparency in Public Life supported by a grant from the America for Bulgaria Foundation.