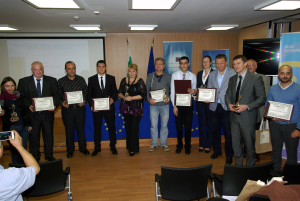 Access to Information Programme held the 13th Right to Know Day Awards Ceremony on 28 September 2015. Nearly a hundred FOI activists from Sofia and the country gathered at the House of Europe in Sofia. The National Ombudsman, Mr. Konstantin Penchev, was a special guest. He addressed the audience, greeting the FOI advocates on the International Right to Know Day. Among the guests were the deputy minister of defense, partner NGOs, journalists, academia; officials from executive bodies and municipalities.

The 2015 RKD Awards Ceremony opened with the song “Breathe” which was composed in 2011 and dedicated to the event.

AIP took part in the Twitter storm initiated by the Freedom of Information Advocates Network.

The 2015 Right to Know Day Awards Jury selected the winners in six categories out of 37 nominations received through the special web site www.RightToKnowDay.net, AIP e-mail or sent by AIP coordinators in the country. The nominations represent FOI success stories of citizens, NGOs, journalists.

AIP has the pleasure to present the names of the winners of the 2015 Right to Know Day Awards. 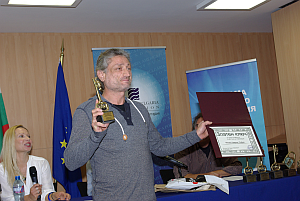 The Golden Key award for a citizen who has most actively exercised their right of information was given to Mr. Milen Chavrov from Sofia. Mr Chavrov was recognized with the award for systematic and consistent exercise of the right of access to information to raise awareness on the AIDS in Bulgaria and for the protection of the right of HIV positive people, as well as advocacy for better health policies in this area.

Mr. Krasimir Rusev from the town of Targovishte for his active and persistent use of the Access to Public Information Act to obtain information about the work of the Municipality of Targovishte, contracts for selling municipal properties.

Mr. Ivan Petrov from the city of Sofia for his long-term use of the APIA, including litigation, as a result of which the Sofia Municipality has changed its disclosure and transparency practices. 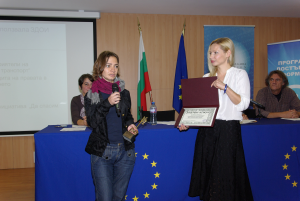 In 2015, the Jury decided to recognize the non-formal Civil Initiative “Let’s Save Kara Dere” with the Golden Key award for exercising their right to know to obtain information about alleged illegal construction at the seaside region of Kara Dere. The initiative comprises of young people, inhabitants of the region, journalists and other people who want to have a wild spot at the seaside for camping and relax. The informal group has used the APIA and public registers to cast light on the investment plan for construction in the region, as well as for finding and exposing legal violations related to the construction permit. The Initiative uses the social media to organize its campaign, including the formulation of information requests.

Center for Protection of the Rights in the Healthcare – for active and efficient search of information related to the healthcare services in Bulgaria. As a result of their active campaign, including litigation, legal amendments were initiated and the National Health Insurance Fund started to publish on their web site information about funds paid to the hospitals. The NGO launched the platform “The Good Hospitals” www.dobritebolnici.info with systematized information on the monthly payments. 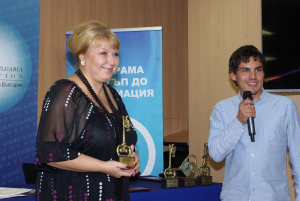 The Golden Key Award for the most efficient use of the Access to Public Information Act by a journalist was presented to Ms. Zdravka Maslyankova from the regional newspaper Yantra Dnes. Ms. Maslyankova was recognized for her use of the APIA to investigate and publish on the wrongdoings in a project for the construction of a chlorine  production factory that would eventually have a negative impact on people’s health. As a result of her investigation, the project was stopped.

A Diploma for Exceptional Contribution to the Transparency and Accountability of the Institution was given to the crew of the “Lords of the Air” (Nova TV). They have used the APIA to follow up on the implementation of measures promised to be taken by certain institutions after wrongdoings had been revealed in the broadcast.

Mr. Yulian Hristov, OFFNews for using the APIA both for his everyday reporting and for thorough investigations. He has requested information from the Ministry of Interior, the National State Security Agency, the State Commission on Information Security, etc.

Mr. Spas Spasov – a correspondent of Dnevnik daily and Capital weekly for the region of Varna. Spasov uses actively the Access to Information law to provide evidence for most of his publications. 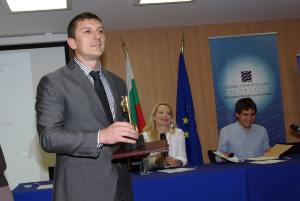 The Ministry of Defense was recognized as the winner of the 2015 Golden Key Award in the category for an institution which has most efficiently organized the provision of public information. The Ministry has progressively improved its active transparency based on the results from AIP annual audit on institutional web sites, has a complete “Access to Information” web section, responds timely and completely to requests and provides access to information, including by e-mail. The deputy Minister of Defense, Mr. Orhan Ismailov, took the award.

The Regional Inspectorate on Environment and Waters – Blagoevgrad for the high level of their active transparency, timely responses to the requests an evidence being the results from AIP 2015 Active Transparency Rating. 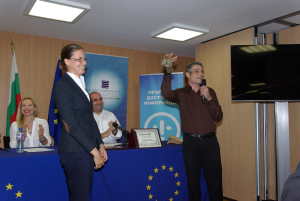 The Padlock anti-award was given to the Ministry of Agriculture and Food for their continuing ignoring of the obligations under the APIA to launch and maintain an “Access to Information” section on their web site, for requiring an e-signature to the requests filed by e-mail, for their refusal to provide the name and job description of the official assigned under the APIA.

For the first time, a representative of the recipient of the anti-award was present and stood up to take the award. The Director of the Public Relations Directorate, Ms. Evelina Stoyanova said that she was happy to be present and take the Padlock and made a promise that the Ministry would fulfill its obligations and respect the right to know.

A Dishonorary Diploma was presented to 30 Municipalities which did not respond at all to the e-request sent within AIP 2015 Audit on Active Transparency. They also lack an “Access to Information” section, information on the department where requests are submitted, annual APIA implementation reports and Internal APIA implementation rules. The anti-award is a reminder to these municipalities that they should be transparent and accountable to the public, especially in the eve of the local government elections.

A Dishonorary Diploma was presented to the Regional Directorate of the Ministry of Interior – Pernik – for blacking out the names of the APIA appointed officials in the appointing order, thus the requestor was left without the information whom to address to obtain information.

Pictures are uploaded at AIP web site: http://www.aip-bg.org/about/gallery/ and on Facebook: https://www.facebook.com/AIPbulgaria/timeline/.