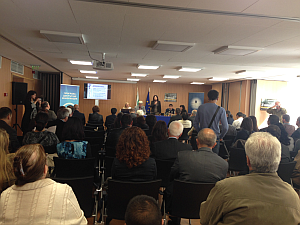 Access to Information Programme held the 12th Right to Know Day Awards Ceremony on 28 September 2014. Nearly a hundred FOI activists from Sofia and the country gathered at the House of Europe in Sofia. Among the guests were representatives of the President’s Office, the Sofia City Ombudsman, partner NGOs, journalists, academia; officials from executive bodies and municipalities.

The 2014 Right to Know Day Awards Jury selected the winners in six categories out of 40 nominations received through the special web site www.RightToKnowDay.net, AIP e-mail or sent by AIP coordinators in the country.

AIP has the pleasure to present the names of the winners of the 2014 Right to Know Day Awards.

The Golden Key award for a citizen who has most actively exercised their right of information was given to Mr. Boris Rangelov – a journalism student in Sofia. Mr Rangelov was recognized with the award for systematic and consistent exercise of the right of access to information. During 2014, due to Rangelov’s requests for information, data were disclosed about the expenses made by the Ministry of Interior for guarding the street protests within the period June 2013 – July 2014.

Mr. Karen Kuzuyan for his active and persistent use of the Access to Public Information Act to solve the problems with the stray dogs in the Municipality of Silistra. 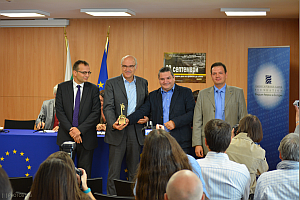 In 2014, the Jury decided to recognize the civil association “National union Edinstvo” with the Golden Key award for their persistent and consistent search of information related to the energy project South Stream. With the support of AIP, the civil association initiated a court case against the Ministry of Economics and Energy after their refusal to disclose documents related to the project.  As a result of the wide public reverberation from the court case and the high public interest in the topic, on September 4, 2014, the Ministry of Economics and Energy published on their web site a large number of documents related to the planning, negotiations, and implementation of the South Stream project.

The WWF – Danube – Carpathian program for launching a web-based Geographic Information System platform on the rivers in Bulgaria (http://gis.wwf.bg/rivers/). The platform allows for detailed online information about the location and the conditions of each Bulgarian river. The data base was collected with the help of the Access to Public Information Act. 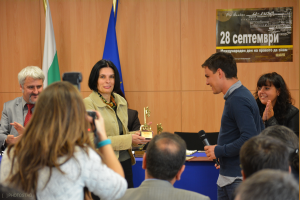 The Golden Key Award for the most efficient use of the Access to Public Information Act by a journalist was presented to Ms. Svetla Vasileva from the Duma Daily. Ms. Vasileva was recognized for her systematic and consistent search of information related to topics of high public interest, defense of the right to information in the court, and publications at every stage of her access to information cases. During the past year, the journalist has used the APIA to obtain information from different institutions, but more specifically from the Bulgarian Air Traffic Services Authority and the Sofia Municipality.

Mr. Spas Spasov – a correspondent of Dnevnik daily and Capital weekly for the region of Varna. Spasov uses the Access to Information law to provide evidence for most of his publications and does not hesitate to go to court to challenge information refusals. The journalist was specifically awarded for two of his investigations during the past year – on a failed project implementation by the Municipality of Varna (A Project for Wasting 1 mln. BGL) and the expenses made by the municipality in the competition for a Capital of Culture 2019 (How much does Varna’s loss of the contest Capital of Culture 2019 cost?)

Two honorary diplomas were given to:

The Municipality of Alfatar for the visible efforts to improve the provision of access to information by increasing their active transparency, an evidence being the results from AIP 2014 Active Transparency Rating: http://www.aip-bg.org/en/surveys/Ratings/205162/.

The Ministry of Interior at the Caretaker Government – Under the Caretaker Government the Ministry of Interior has made serious steps towards enhancing the transparency of the institution for several weeks only. Police statistics for registered and revealed crimes since 2000, activity reports, strategic documents were uploaded on the ministry’s web site. 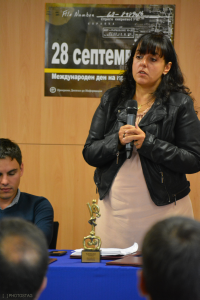 The Padlock anti-award was given to the Prosecutor’s Office of Bulgaria for the overall and deepening lack of transparency of the institution. It was specifically awarded for refusing to disclose the names of the prosecutors in cases of high public interest; activity reports for the last 10 years on the ground of official secret exemption (although one of those has been published on their web site); the refusal to disclose the reports on misuse of special surveillance means.

A Dishonorary Diploma was presented to 107 Silent Institutions which did not respond at all to the e-request sent within AIP 2014 Audit on Active Transparency.

The Tied Key anti-award for an absurd access to information provision practice was given to the Ministry of Labor and Social Policy. The ministry provides information by e-mail only after the requestor appears at the premises of the ministry and signs a confirmatory protocol for receiving the requested information

The 2014 RKD Awards Ceremony opened with the song “Breathe” which was composed in 2011 and dedicated to the event.

At the ceremony, the IRKD Booklet of Freedom of Information Advocate Network was disseminated.

Damianitza JSC has kindly contributed to the celebration of the Right to Know Day again.