AIP Held a Workshop with the Journalists from its Coordinators’ Network 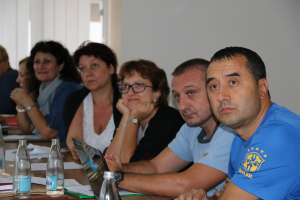 The Access to Information Programme (AIP) held a workshop with the journalists from its coordinators’ network on 11-13 September 2015 in the city of Veliko Tarnovo. The workshop was held within the framework of the project Enhancing the Capacity of Nongovernmental Organizations to Seek Public Information supported by a grant under the NGO Programme in  Bulgaria under the Financial Mechanism of the European Economic Area 2009 - 2014 (http://www.ngogrants.bg).

AIP Executive Director Gergana Jouleva opened the meeting on September 12 and presented the goals and the activities under the project as well as the funding programme.

Gergana Jouleva and Alexander Kashumov, head of AIP legal team, presented the amendments to the Access to Public Information ACT (APIA). The Draft Law on amendments was introduced in the National Assembly by the Council of Ministers in April 29, 2015. The two AIP experts took an active part in the public debate on the drafting of the amendments, presented AIP statement in the four parliamentary committees which heard the draft law in May 2015.

Stephan Anguelov from AIP legal team showed the opportunities that the Open Data Portal opens for searching and using the information it contains.

The AIP attorney-at-law Kiril Terziiski presented access to information court cases supported by AIP and court decisions delivered during the first half of 2015.

The AIP attorneys-at-law Darina Palova and Alexander Kashumov gave practical advices for using the APIA and public registers in the work of the journalists.

Diana Bancheva reminded about the categories under which everyone can nominate an NGO, a citizen, journalist or an institution for the Right to Know Day Awards. AIP will present the awards at a 28 September 2015 ceremony to be held in the House of Europe – Sofia on 3.00 pm.