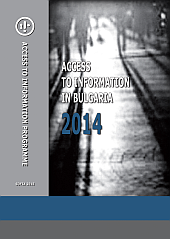 For the first time, the AIP annual report contains no recommendations for legislative amendments. The reasons are:

Firstly, AIP published a Concept Paper on Amendments for the Access to Public Information Legislation in the beginning of 2015. The Concept Paper is based on the results of a 2014 nationwide public consultation with different interested groups and contains specific recommendations for overcoming identified problems in the APIA implementation.

Secondly, in the summer of 2014, a working group at the Ministry of Transport, Information Technologies, and Communications was formed with the mandate to draft amendments to the Bulgarian legislation regarding the transposition of the revised Directive 2013/37/EU on the Re-use of Public Sector Information. AIP experts were invited to take part in the working group and presented AIP statement. Part of the recommendations which AIP made within the working group were taken into consideration and included in the texts of the Draft Law on Amendments to the Access to Public Information Act.

However, one of the main AIP recommendations – the establishment of an oversight body to coordinate and control the implementation of the Access to Public Information Act– was not supported.

The Bill was introduced in the National Assembly on April 29, 2015. AIP presented its statement at the sessions of the four responsible parliamentary committees in May 2015. The first reading of the Bill in the Parliament is still pending.

The report is prepared within the project Civil Center for Support of Transparency in Public Life, supported with a grant by the America for Bulgaria Foundation.