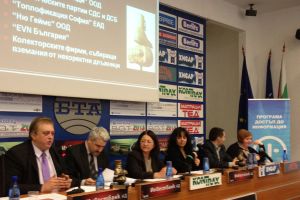 Access to Information Programme (AIP) and Internet Society Bulgaria held the Big Brother Anti-awards ceremony in Bulgaria on January 28, 2013, 12.00, at the National Presscenter of the Bulgarian News Agency.

The anti-awards are given to government institutions, private companies, or individuals, who have done the most to invade personal privacy. The Big Brother Award was founded by Privacy International (PI) – a human rights group working for the protection of privacy. PI maintains the Big Brother Awards International Site. The name of the award is inspired by the famous anti-utopian novel by George Orwell. The phrase "Big Brother is watching you" refers to invasive surveillance, limiting the personal freedom.

The 2013 Big Brother Awards Ceremony in Bulgaria was held on the European Data Protection Day. The date 28 January marks the adoption of Convention 108 of the Council of Europe for the protection of individuals with regard to automatic processing of personal data.

The Commission for Personal Data Protection sent a greeting address on the occasion of the ceremony.

The members of the jury who selected the recipients of the 2013 Big Brother Anti-awards are:

The jury had to select the “winners” in two categories and among 15 nominations for privacy violators.

The jury decided the two awardees to be:

The Council of Ministers of the Republic of Bulgaria 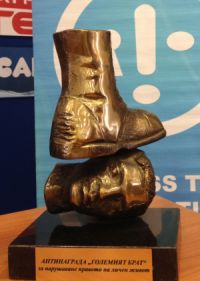 The anti-award was given for the inaction of the Council of Ministers with regard to sponsoring amendments to regulate the use of special surveillance means (SSM) and the access to traffic data in order to guarantee higher protection of privacy. In 2011 and 2012, the Parliamentary Standing Subcommittee for Oversight and Monitoring of the Use of Special Intelligence Means and the implementation of the Electronic Communications Act released disturbing reports with regard to the number of cases in which SSM were used and the volume of personal data provided to the Ministry of Interior. SSM were used to collect information in thousands of cases, while only 747 of those served as evidence in criminal proceedings. There is no data that the rest of the collected data were destroyed.

The Parliamentary Standing Subcommittee also made recommendations in their reports for amendments to the effective Special Surveillance Means Act and the Electronic Communications Act in order to guarantee higher protection of personal data. Nevertheless, the Council of Ministers has not sponsored any draft amendments to any of the two laws.

The anti-award is given to the heating company “Toplofikatsia Sofia” EAD for disproportional and unlawful processing of the personal data of its clients. An inspection carried out by the Commission for Personal Data Protection found out that the company required disproportional volume of copies of documents (including copies of notary acts for estate properties) from its clients and did not maintain an updated register of its clients. Also, volumes of clients’ data are transferred to third parties without the informed consent of the clients. The company was sanctioned by the Commission.

Among the other nominations in the two categories were:

For State Bodies - The Sofia Directorate of Internal Affairs; Municipalities, which has introduced requirements for issuing of free public transportation cards for children under 7 years; the Sofia Municipal Council,  the Commission for Consumer Protection, the Minister of Finance, the Prosecution Office, and the Sofia City Court.

For Private Companies – the online shop for spying equipment SRS.bg; the company U-ID OOD; the company New Games OOD which organizes the show Who Wants to be a Millionaire; the electrical company EVN Bulgaria; and companies for forced collection of debts on behalf of other companies.

The 2013 Big Brother Anti-awards Ceremony had a wide public outreach - 40 TV and Radio, online and printed media covered the event.

Information about past Big Brother anti-awards ceremonies in Bulgaria can be found on AIP web site: http://www.aip-bg.org/en/privacy/Big_Brother_Anti_awards/106734/.

And also on the Big Brother Awards web site for Bulgaria: http://bg.bigbrotherawards.org.

Pictures from the 2013 Big Brother Anti-awards ceremony are available in our Gallery.