The team of Access to Information Programme wishes you health and successful initiatives in 2014!

110 Representatives of Regional and Local Administration, NGOs, journalists, and citizens from the towns of Pleven and Lovech took part in the forum organized by AIP on 12 and 13 November 2013 respectively. The Information Days in are held within the implementation of the project Access to Information Programme – Civil Center for Support of Transparency, supported with a grant by the America for Bulgaria Foundation. 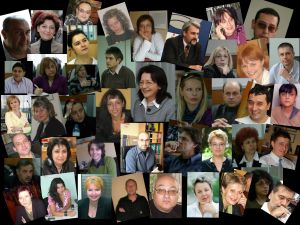 Today, 23 October 2013, Access to Information Programme turns 17. During all these years, we have been persistently following our mission to assist the exercise of the right of access to information. We have been advocating for better access to information in Bulgaria and have been taking part in international networks and initiatives for higher standards in the area.  We would like to thank to all our colleagues, partners, friends, to our coordinators in the country, for your cooperation and support.

The team of Access to Information Programme wishes you all the best for the birthday of the organization! 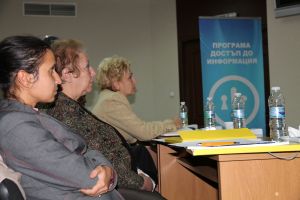 Over 100 representatives of regional and local administration, NGOs, journalists, and citizens from the towns of Pleven and Lovech took part in the forum organized by AIP within the implementation of the project Access to Information Programme - Civil Center for Support of Transparency.

The 2013 Right to Know Day Awards Jury selected the winners in six categories out of 39 nominations received through the special web site www.RightToKnowDay.net, AIP e-mail or sent by AIP coordinators in the country. Access to Information Programme held the 11th Right to Know Day Awards Ceremony on 28 September 2013. A hundred FOI activists from Sofia and the country gathered at the National Pressclub of the Bulgarian News Agency. A special guest to the ceremony was Mr. Toby McIntosh, executive editor of Freedominfo.org.

Since recently, the Supreme Administrative Court decisions and rulings under the Access to Public Information Act are collected and easy to search. The web portal http://zdoi.gkzj.org/ currently contains 1,413 decisions and rulings of the Supreme Administrative Court (SAC) on Access to Public Information Act (APIA) cases, which is virtually the entire SAC's case law on the subject. The portal has its own search engine which allows for searching by key words and combinations of key words in every document. It also makes the documents visible to Google search engines. The information on the web portal is being updated daily. The web portal was launched at the end of March 2013 by Mr. Georgi Serbezov from the Nonprofit Association Civil Control – Animal Protection, town of Plovdiv.

Global Right to Information Update: An Analysis by Region 08.07.2013

Today, the Freedom of Information Advocates Network (FOIAnet) launched a major global analysis of the development of the right to information (RTI) movement, broken down by region. The publication follows FOIAnet’s celebration of its 10th anniversary on International Right to Know Day, 28 September 2012. The Update, which was co-authored by different human rights advocates for each of the seven regions it covers, presents the very different challenges, developments and experiences of civil society advocates for RTI in each region of the world. The Update also describes the key struggles that have taken place in each region, successes and failures, and lessons learned, along with a selection of case studies that illustrate how RTI has been promoted within each region.

The Members’ of Parliament Subsidies Declarations Are not a Secret 23.05.2013

On May 16, 2013, a panel of the Supreme Administrative Court in Bulgaria repealed the refusal of the Ministry of Finance to provide access to declarations of independent MPs to direct their full subsidy from the budget to a particular political party.

Support the Call for Investigation of a Threat Against a Renowned Journalist and His Family 29.04.2013

At a press conference held on April 23, 2013 in Sofia, human rights advocates, public figures, and journalists made public their Call towards the Chief Directorate for Combating  Organized Crime, the Ministry of Interior and the Public Prosecutor’s Office to fulfill their duties and find the authors of a death threat addressed towards the investigative journalist Hristo Hristov and his family. Hristo Hristov is the founder and author of the web site www.desebg.com where hе publishes results of his research of the archives of the former State Security Services and the investigations related to the communist past of Bulgaria. Hristov is also an author of a number of books – result of his research in the archives of the secret services of the former communist regime: http://hristo-hristov.com/. If you would like to support the Call, please send an e-mail to diana@aip-bg.org with your name and affiliation/profession.

The Access to Information Programme presents the analysis of the results of its 2013 Audit on Institutional web sites in Bulgaria. The audit was performed within the period 7 – 25 January 2013. A team of AIP reviewed and evaluated 489 web sites of 490 executive bodies at a central, regional, and local level, and also public-law entities and 7 independent state bodies. 490 electronic requests were filed for a copy of the last public procurement contract signed by the institution in 2012.

On February 27, 2013 Access to Information Programme (AIP) presented the results from its audit on institutional web sites and the 2013 Active Transparency Rating at a press conference held at the Bulgarian News Agency. The aim of the audit, which AIP performs since 2006, is to evaluate how the executive bodies fulfill their obligations for proactive publication of information online under the Access to Public Information Act and other legal regulations and to assess their readiness to respond to electronic requests. On the base of the indicators, AIP launched an updated 2013 Active Transparency Rating.

AIP Held the Annual Meeting with its Country-Wide Coordinators' Network  15.02.2013

On February 15, 2013 in Sofia, Access to Information Programme (AIP) held the annual meeting with the journalists of its country-wide coordinators' network. AIP Executive Director Gergana Jouleva presented key achievements from AIP advocacy activities in 2012, summarized in AIP organizational annual report (in Bulgarian). The 2013 goals and challenges before AIP and the coordinators' network were outlined.

Access to Information Programme (AIP) and Internet Society Bulgaria held the Big Brother Anti-awards ceremony in Bulgaria on January 28, 2013, 12.00, at the National Presscenter of the Bulgarian News Agency. The anti-awards are given to government institutions, private companies, or individuals, who have done the most to invade personal privacy. 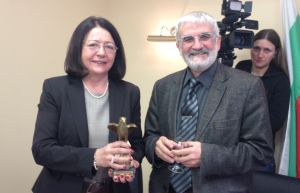 AIP recognized by the Bulgarian National Audit Office for contribution to greater publicity and transparency of the institutions  15.01.2013

On January 15, 2013 the President of the Bulgarian National Audit Office Prof. Valeriy Dimitrov presented to Access to Information Programme Executive Director Ms. Gergana Jouleva the Symbol of the National Audit Office and a Diploma for AIP contribution to the enhancement of the publicity and transparency of the institutions in Bulgaria and to the development of an informed society.