The Access to Information Programme is preparing to hold the 17th Right to Know Day Awards Ceremony on September 28, 2019 in Bulgaria. 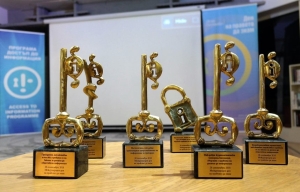 28 September is the day when the Freedom of Information Advocates Network was established in 2002 at a litigation conference held in Sofia, Bulgaria. The AIP is one of the founders and active member of the FOIAnet and since then, the AIP has been taking an active part in the FOIAnet initiatives, including the celebration of the Right to Know Day.

In 2015, UNESCO declared September 28th as the "International Day for Universal Access to Information".

The RKD Campaign in Bulgaria

The Right to Know Day is the strongest tool in the AIP campaign for encouraging the exercise of the right to information and pushing for enhanced government transparency and accountability.

Nominations in six categories are collected to be awarded with four positive and two anti-awards. 32 nominees are competing for the 2019 Right to Know Day Awards. Nominations were collected via the special web site maintained by the AIP www.RightToKnowDay.net.

Each nomination is in fact a unique access to information case. That is why the media interest is high and the coverage is wide. Winners are selected by a jury of renowned journalists and NGO representatives.

The Golden Key Award and anti-awards

At the Right to Know Day Awards Ceremony on the 28 Sept., the AIP would present the “Golden Key” awards to citizens, journalists, and NGOs, who have actively exercised their right of access to information and public authorities with good transparency practices. Institutions with bad transparency practices receive the “Padlock” anti-award, while absurd practices are recognized with the “Tied Key” anti-award.

The event has gained very high legitimacy. The Golden Key award has become a symbol of freedom of information, transparency and accountability.  The annual media outreach is of dozens publications, radio and TV shows.

The 2019 Right to Know Day Awards Ceremony in Bulgaria is held within the Access to Information Forum three-year project, which benefits from a € 179 507 grant from Iceland, Liechtenstein and Norway through the EEA under the Active Citizens Fund Bulgaria Programme.