The Access to Public Information Act (APIA) was adopted by the National Assembly in June 2000 and promulgated in the State Gazette, issue 55 as of July 7, 2000.

The publication of summarized information about the implementation of the APIA by the Council of Ministers is an obligation under Art. 16 of the law since its adoption. It is published as part of the annual government report on the state of the administration. These reports have been prepared and published annually since 2001.

The analysis of the data on the APIA implementation gives the picture of the APIA implementation within the executive power and shows the improvement of the process of accountability, its digitalization (2005), and the role of the body responsible for the publication of the summarized data.
Pursuant to the requirements provided by the APIA (Art. 15, Para. 2), the reports on the implementation, which the heads of executive bodies should prepare, submit and publish, should contain data on the number of filed requests, refusals to provide access and the grounds for the refusals. During the years, however, besides the legally required data, more and more detailed information has been published about the administrative capacity for implementing the law, the implementation of the obligations for proactive publication of information, the maintaining of registers of received requests, the trainings of public officials, the appeals against decisions under the APIA and the delivered court decisions. The content of the annual reports has been changing with the change of the governments, although the information system for collecting the data was established and operating since 2004, as stated in the 2006 government report, and the data should be available in the data bases of the Council of Ministers.[2]
1. Administrative capacity to implement the Access to Public Information Act (APIA)[3]

Administrations, which have received access to public information (API) requests during the specific year

The chart below shows clearly that since 2009 there is a tendency of closing the gap in the number of administrations, which submit Annual Reports in the Integrated Information System of the State Administration and those reporting their work on the APIA. During the past five years, their number is the same.

Administrations with assigned unit or official under the APIA

Pursuant to the 2007 APIA amendments, the heads of the administrative structures in the executive power system should assign officials to be directly responsible for the provision of public information (Final Provisions to the Law on Amendments to the APIA, State Gazette issue 49/ 2007, §18). Information about such units/ official can be found in the government reports since 2006. In 2021, 34 administrative structures still do not have such a unit/official.

Administrative units responsible under the APIA

Data about the types of the administrative unit responsible under the APIA appear for the first time in the report “State of the Administration 2013.” Those data clearly outline the tendency of assigning the responsibility to the Legal Departments or another specialized unit.

Administrations with Adopted Internal APIA Implementation Rules
The organization, the responsibilities, and the oversight of the implementation of the obligations under the APIA, including the proactive publication of information, requires the adoption of internal APIA implementation rules by the administrative structures. These rules should be published in the Access to Information section of the institutional website. The data from the 2019 Government’ report show that 45 administrative structures still have not adopted APIA Internal Rules, 493 administrations published them on the websites and 393 out of them were updated in the line of the amendments to the APIA from 2015.[4]

Administrations, which have organized and held trainings for API officials[5]

The obligation for the heads of the administrative structures to financially secure trainings under the APIA was introduced in the Final Provisions of the Law on Amendments to the APIA (State Gazette, issue 104/ 2008, §9). The number of administrations organizing trainings is almost the same during the years. Just recently, it passed over 61 % for 2020 and 68% for 2021.

The electronic requests were equaled to the written requests under the APIA as early as 2000 when the law was adopted (State Gazette, issue 55/ July 7, 2000).  The rules for registering and accepting the e-requests had to be adopted by every public body. The Amendments to the APIA as of 2015 introduced the legal framework of these rules. That is why it is not clear why 4 administrative structures still do not accept e-request, based on the government report data.

The registration of access to information requests is mandatory pursuant to Art. 25, Para. 3 of the APIA. It is still unclear if the registration is done on paper by 122 administrative structures when they do not maintain electronic registers of the requests.

Administrations with established reading rooms for review of the information access to which is provided on the spot[6]
The APIA amendments in 2007 introduced an obligation for the heads of the administrative structures to establish an appropriate place for review/ reading of provided information (State Gazette, issue 49/ 2007, §18).  Data about reading rooms can be found in the government reports until 2009. According to the data from the AIP audit on institutional web sites from March 2021 and 2022, only 140 (2021) and 169 (2022) out of 563 public bodies published information about reading rooms in the Access to Information section.[7]

For 20 years of APIA implementation and hundreds of court cases ending with court decisions in favor of the access to information requestors, only one penalty has been imposed for administrative violation of the APIA in 2013, in 2017 – two penalties have been reported and in 2018 – one.

The total number of requests received by the institutions has been decreasing. The tendency finds its explanation in the proactive publication on the websites of the obliged bodies of specific categories of information, which should have been requested during the first years of the APIA implementation. On the other hand, the decrease in the number of the written requests and the e-requests that have been equaled to them is not so high.

How the access to public information requests are filed?

The tendency observed until 2009 for a large number of oral requests reported by the administrative structures and the remark in the 2009 report that there were no mechanisms for registering the oral requests, shifts sharply during the next years and in 2019 only 232 oral requests were reported. In 2019, for the second year, the electronic requests are more than those filed on the spot or by post.

Administrative decisions on access to information requests are by rule issued only on written requests, the electronic requests being equaled to written. In 2021, 1399 e-requests were filed through the Platform of Access to Public Information maintained by Council of Ministers: https://pitay.government.bg/PDoiExt/

The statistics on the different groups of requestors appears in 2004. It is understandable that the highest number of requests are filed by citizens, since the requestors are not obliged to signify their profession, affiliation to a company, NGO, or media. Those who have filed requests on behalf of a media, company, or NGO fall into the statistics.

What type of information is mostly sought under the categorization of the APIA?

What are the topics on which information is sought?

The topics on which information is sought reflect the main elements of the right of access to information. It is necessary for the exercise of other rights, it is fundamental for the civil participation in the public debate for policies, and allows citizens to exercise control over the work of the institutions.  The next chart gives more detailed picture of the topics on which information is mostly sought. What is of concern is that requests are still filed for draft normative acts and corresponding documentation, while that type of information should be published on the Internet sites of the institutions pursuant to the obligations given by the Law on Normative Acts (LNA).

The tendency in recent years is that there is more seeking of information related to the exercise of civic control over the work of the institutions. 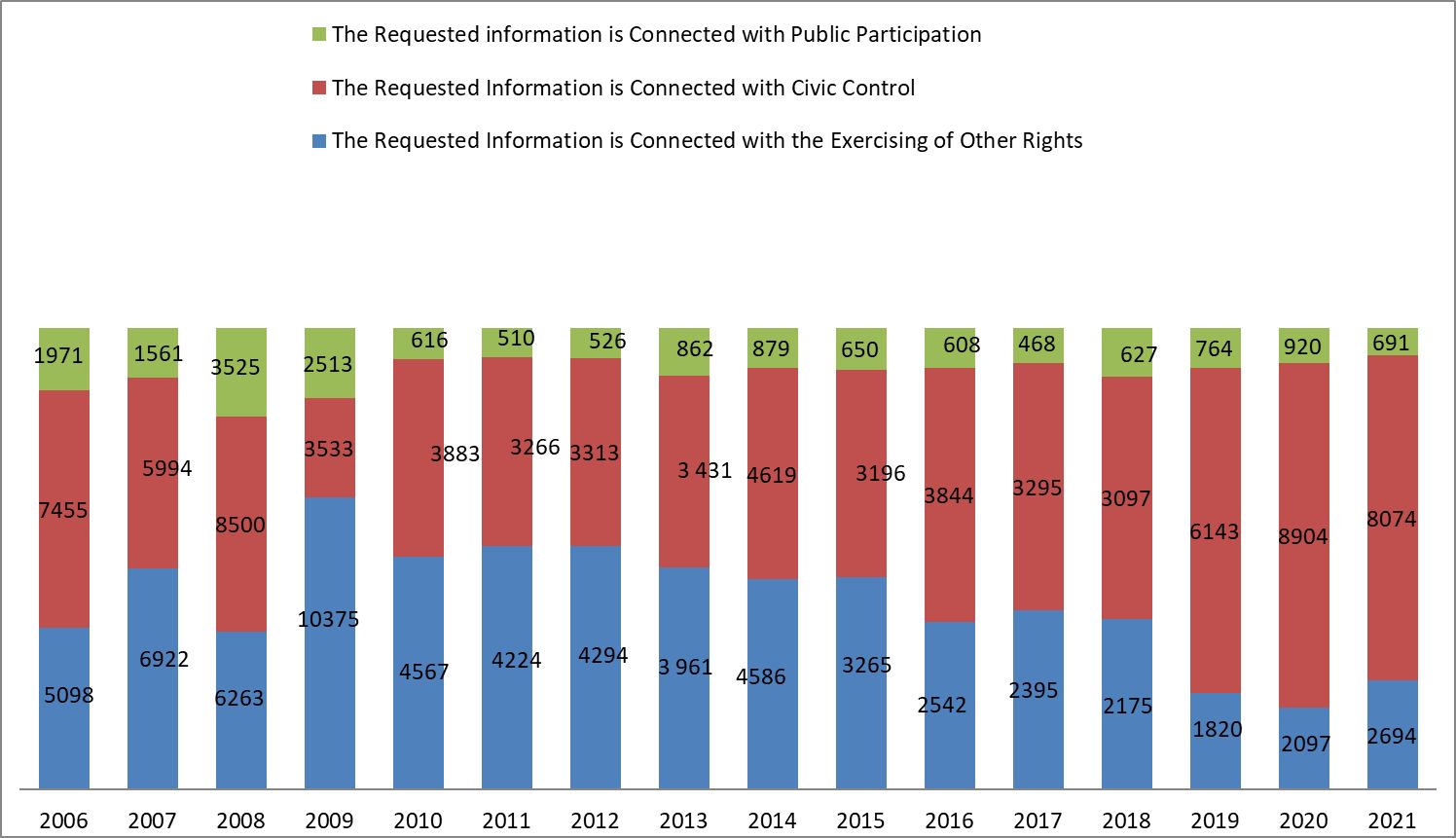 The majority of the decisions on access to information requests are those granting full access to the requested information, according to the data published in the government reports.

Decisions to re-send the requests to the relevant administration

Notifications for unavailability of requested information

The chart below shows the discrepancy between the reported number of requests, the issued decisions, and the requests left without consideration till 2009.

After the obligation for balancing protected rights and interests and the overriding public interest was introduced with the APIA amendments (State Gazette, issue 104/2008), data about decisions taken after such a balance appear in the reports since 2009. In order to comprehend these data, we should take into consideration the data about the number of decisions to refuse access and the grounds for these refusals.
Out of the legitimate grounds for refusals, provided by the law, only those stipulated by Art. 37, Para. 1, Item 1 – the requested information is classified or other protected secret, are not subject to balance against the overriding public interest, as the balance of interest has been done by the legislator. The restriction provided by Art. 37, Para. 1, Item 3 of the APIA, is not subject to the public interest balance either, namely, “the requested information has been provided to the requestor during the previous 6 months,” which is a restriction which does not protect rights and interests. If we look at the data about the decisions to refuse access and the decisions after a balance of interests, as well as those subject to the overriding public interest assessment, i.e. third party’s interests, trade secret, preparatory documents (Art. 13, Para. 1. Item 1) and the negotiation process (Art. 13, Para. 1, Item 2), it remains unclear why the cases when balance of interests was made are so few.

Pursuant to the provisions of the APIA, the requestors have the right to appeal the decisions or the refusals of access to public information before the administrative courts through the public body which have delivered the decision. The reports on the state of administration contain data on the appeals and the court decisions during the years.

As it is apparent from the chart below summarizing the data from the Government’ reports, the highest number of court decisions is of those which repeal completely the decision of the public body which has delivered the decision granting or refusing access.

[1]  http://iisda.government.bg/annual_reports  (in Bulgarian)
[2] “The State of the Administration 2005”: „The report on the state of the administration is prepared for the sixth time. For a second successive year, the heads of the administrative structures within the executive power system submit information electronically via an Internet based system (www.sareport.government.bg). After the adoption of the report by the Council of Ministers, it will be referred for information to the National Assembly.”
[3] The charts are prepared by the AIP on the base of data published in the annual reports “The State of the Administration” 2001-2019.
http://iisda.government.bg/annual_reports  (in Bulgarian)
[4] The data from AIP Active Transparency Index 2021, indicators B.7, B.7.1, B.7.2: https://data.aip-bg.org/en/surveys/FQWA23/stats-indicators?q=FJ8R25
[5] The 2011 Government’ report lacks information about the administrations, which held trainings.
[6] There are no data about administrations with established reading rooms in the government reports after 2009.
[7] Results from the AIP 2021 audit on institutional web sites by indicators. See Indicator B.15 https://data.aip-bg.org/en/surveys/FQWA23/stats-indicators?q=FJ8R25
[8] The Government’ reports for 2013 and 2014 lack data on court decisions on appeals under the APIA.